A Nottinghamshire woman has received awards from two different organisations in recognition of her tireless humanitarian work.

Val Leivers of Bestwood Country Park in Nottingham will receive the ‘Champions of Change’ award from Rotary International Great Britain and Ireland and has also been made an honorary member of The Townswomen’s Guilds, alongside two others this year,  Baroness Tanni Grey-Thompson DBE DL, and historian and writer Jane Robinson. 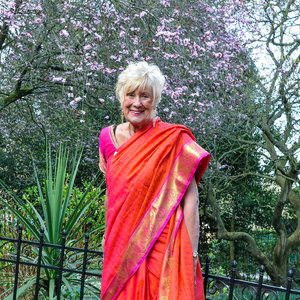 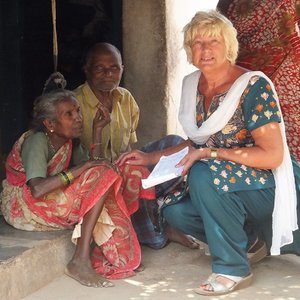 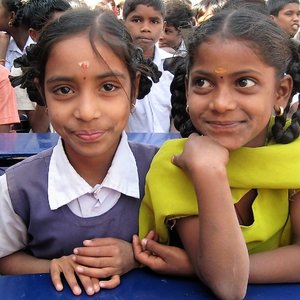 A retired Deputy Head Teacher, Val is currently an active Governor at Mansfield’s Samworth Church Academy which is a member of the Southwell & Nottinghamshire Multi Academy Trust. She has previously been a Trustee at Headway, the brain injury charity, and Chair of Governors at Roundwood Primary School. After teaching English as a volunteer for a few weeks at HMP Nottingham Val was asked to stay on a formal basis for six years with this income being used for projects in India.

In 2010, Val changed the face of Rotary when she became the first female Rotary District Governor in the Nottinghamshire, Derbyshire, Leicestershire, and Staffordshire district, ending a 65-year run of male only leaders. Val is the only female Rotarian in Great Britain & Ireland to receive both of Rotary International’s highest accolades, the “Service Above Self” award and the “Rotary Foundation’s Distinguished Service Award.”

Now she dedicates herself to voluntary work in India, in orphanages and tribal villages with one of her main projects being the transformation of a school in Secunderabad which has taken it from an under-resourced and ill-equipped school for 100 children, to a thriving and fit for purpose school for 1,390 children from some of the most disadvantaged families.

The ‘National Rotary Champions Awards for outstanding voluntary’ work was specifically awarded to Val for the £1.2 million pounds she has raised, and her unstinting work to improve conditions with many projects in India, mainly in the Hyderabad area of Telangana, and especially at the Sri Sai Vidyarthi School.

Val said that in the seven years she has been supporting the school, a difficult but ultimately successful transformation has taken place, not only to the school building, but to the life chances of its pupils. She said, “My involvement with the school began when my husband Terry and I were looking to sponsor some children throughout their education. We contacted our Indian friends in Rotary, and this eventually led to my husband and I sponsoring two boys after we had visited the school ourselves.

“When we arrived, it was one big room with an awful corrugated tin roof, in boiling heat and with a tree growing through the floor of the classroom where 100 children sat. The teachers were working extremely hard with little infrastructure or facilities and so we decided to see what more we could do to help.”

That is when Val’s life became a quest for funds and equipment to transform the school from an unsafe building with few resources, to a beacon of learning for its community. Now the school meets fire and safety regulations, has large, clean classrooms, a library, tables and seating, a science lab, computers, and ample learning resources for the 1,390 pupils. The school’s Principal, Dr Prasad has also been recognised as the “Best Principal of 2020” by the India Science Institute.

Val spends 5 weeks in Hyderabad each year, staying at friends’ homes, at an Ashram school in a tribal village and in the Secunderabad school with Dr Prasad’s family. On her return to the UK, Val fundraises by various means including gardening and decorating as well as speaking to many different organisations to seek their support. “I try to raise funds wherever I can, and I am always busy. The school can now operate at a high standard with committed and fully qualified teachers, with amazing children and in a community whose aspirations are rising. They understand that education offers their children better life chances than ever before. They inspire me to keep going. They never give up so why should I?”

It is this spirit and dedication to her charity work that led to Val’s invitation to speak to a large audience at The Townswomen’s Guilds’ International Women’s Day Conference in 2019 about her quest to improve education, particularly for underprivileged girls, in India.  Subsequently the membership voted to make Val an honorary member with the following citation. “At The Townswomen’s Guild we are immensely proud of the outstanding women who through their actions and principles have had a positive impact in the fight for equality.”

Val said, “I was in India when my husband Terry contacted me to say ‘Val, you are famous at last!’ To be in such company as Jane Robinson and Tanni Grey-Thompson is amazing and I honestly had no idea that I had been nominated. I will wear my Townswomen’s Guild badge with pride!”

Now Val says she has more work to do. After providing every child at the school in India with a pair of shoes last year, all 1390 of them, she says her shopping list is still full.  “If I am hands on, I know exactly what is happening and exactly where every penny is spent. I do it for the children in India, not for me.

This has become the school song and I tell them year that I’ll never give up on them.”

Val’s husband Terry said she is an unstoppable force, and until recently when ill health prevented it, he also worked with Val in India. He said, “Nothing daunts this unbelievable female dynamo and if only we could bottle her vitality, her drive and her enthusiasm to help others it would be a best seller. Val has endless energy and a profusion of qualities which enable her to achieve results in some of the most difficult circumstances. I am so proud of Val, not just for what she does, but who she is. If I could give her one thing in life it would be the ability to see herself through the eyes of others, then she would see what a special person she is to so many people. Life would be boring without her. I am content now being in Val’s shadow and I know how Denis Thatcher must have felt!  She is simply the best!”

The Principal of Samworth Church Academy in Mansfield where Val is a Governor, said it comes as no surprise that Val is being recognised. “Val has served on Samworth Church Academy’s board of Governors with the same energy and commitment she shows to everything she does. It is no surprise to us that she has been recognised for such awards and she thoroughly deserves the recognition for her service.”

Donna Wallbank, President of Rotary International in Great Britain & Ireland, commented, “The Champions Awards is about giving those who pioneer, lead and support some amazing volunteering projects the recognition they deserve. The selfless and truly life-changing impact of our champions really demonstrates how we can make a difference and touch people’s lives. Rotary is certainly a place where people can turn their passion and ideas into lasting change. There are so many heroes out there and to them I say, ‘thank you and keep doing what you’re doing’. Val’s work is invaluable in helping those who continue to be affected by lack of educational facilities and equipment and she is a very worthy recipient of one of this year’s awards.”